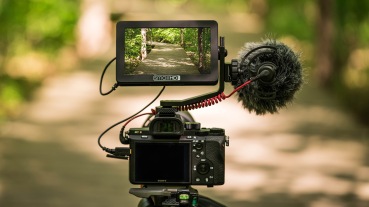 SmallHD announced the Focus this week at NAB. The Focus is SmallHD’s first 5 inch, touch-screen HD video monitor. Daylight view-ability (800 Nit Display = no Sunhood Necessary), touch-screen, and a mounting option coming in at only $500.

It is designed for use with smaller DSLRs and Mirrorless cameras (HDMI Only). This monitor also uses the same menu interface the 500 and 700 series monitors do which means you will be able to use all the same features like Peaking, LUTs, Waveform, Zebra, and much more. 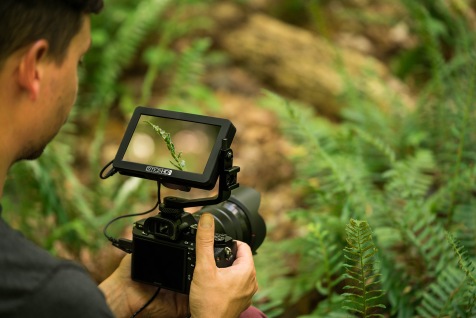 The Monitor mounts to the top of your camera through the hot shoe with a 180° tilt mount. The mount also has an additional cold shoe mount located on the side of the arm as seen in the photo above so you can mount a microphone or even a small fill light. The compact size of this monitor makes it a great addition to a run and gun setup.

The hardest thing I found when using my SmallHD 502 monitor was the amount of LP-E6 batteries I needed to carry. But with the Focus you can travel even lighter than ever before. The Focus uses Sony L-series batteries that are more powerful and will last longer. You can even piggy back off the monitor’s power supply so you can power your camera (Dummy Battery Needed).

When the Focus begins shipping in early June 2017, we’ll be able to accurately stack it up against the Black Magic Video Assist which unlike the Focus actually has built in sdi.

Overall at this price range it is a great deal for someone looking to get a monitor for a smaller camera package like a Panasonic GH5 or even a Sony A7s II.

Zeiss announced a new line up of compact cinema glass this year at NAB, the CP.3 and CP.3 ΧD Lenses. Redefined with new technology and better ergonomics the new CP.3 series lenses consist of ten different focal lengths that range from 15mm all the way to 135mm. The new series covers all applications from wide-angle to telephoto.

The lenses also feature advanced lens coatings, painted lens rims, and special light traps within the lens barrel to reduce glare and flares you would get when using the CP.2s. These lenses also provide higher contrast, richer blacks, and more saturated colors.

Compared to the CP.2 series the CP.3 model is more compact and weigh less.

Zeiss eXtended Data is a feature that gives the filmmaker even more creativity and choice. Via external LEMO interface the CP.3 lenses will give information about lens’ distortion, and shading characteristics in real-time to make your workflow even faster.  Lens settings are digitally captured every frame avoiding the need to manually record every shot.

Overall Zeiss makes high quality optics and if you are in the market for beautiful cinema glass like these or close to the CP.3s then be sure to search the web for Zeiss CP.2s because I am sure a lot of filmmakers will be moving up to the new CP.3 series and the price might drop on the older models.

With day one in the books the 2017 NAB Show in Las Vegas, Nevada did not disappoint. Major players in the film making industry came out swinging with new product announcements. Atomos, Dji, Freefly, SmallHD, and Zeiss just to name a few, all with new products which will be available later this year.

Linked below is each company’s very own article discussing their new products, first impressions, and much more. There was just too much to cover in just one article. Click a company below to get started.

Quick Short of a Fiat 850 Abarth

Check out Robb’s other sport cars for sale at http://www.rfsportscars.com

Kimberly and Shane Recap
May 21 2016
Terrain at Styers

Took this beautiful 1989 Porsche Carrera 4 out for some rolling shots and had an absolute blast with the owner Pat from lowerclassapparel.com and his son Mason.

With the rise of social media in the last ten years many companies as well as individuals find themselves looking for a voice and the attention of their audience. Whether it is to market a product or to build a personal brand, social media has turn into a last-ditch effort in order to grab the consumer.

“The Big Idea; Branding in the Age of Social Media”, Douglas Holt discusses a new era in marketing and branding with the dawn of social media applications like YouTube, Twitter, and Facebook; an era becoming known as the golden age of branding. “In the early days of that era, companies borrowed approaches from popular entertainment to make their brands famous, using short-form storytelling, cinematic tricks, songs, and empathic characters to win over audiences” (Holt, p. 42). Unfortunately there is a catch, for some reason this strategy is not going completely the way they planned. Now everyone is seeking the audience’s attention whether to find a job or make one, companies are using social media as an attempt to “leapfrog traditional media and forge relationships with the customers”. Companies believe that by connecting with their customers they can build an idea of trust and loyalty which in turn will help them spend less on advertising and still reap the benefits of selling their product whether it is good or not. The problem is that only a few companies have been able to successfully do this and “social media seems to have made brands less significant” (Holt, p. 42).   Even with businesses investing billions of dollars in advertising and marketing they seem to keep falling short to a phenomenon Holt calls, “crowd-culture”.

Crowd culture branding in the twenty-first century has revolutionized the way company’s and people brand themselves and their products. Crowd culture is an occurrence Holt defines as when “digital crowds now serve as a very effective and prolific innovators of culture” (Holt, p. 42). By adapting to the crowd (consumers) and connecting with them through technologies like social media, companies and individuals hope to ditch the ancient styles of advertising and now market their brands effectively through the social media applications by using the very people they sell their products too.

Moving away from the traditional ideas of marketing to the consumer, human culture has exploded with new groups and niche’ markets, areas that were never there fifth-teen or twenty years ago but because of the ability of the internet or the connectivity that the internet provides to consumers, they have been able to connect with one another and build groups and forums discussing and exchanging ideas about their favorite things or products. A good example of this would be to look at a website called Reddit.com, here a person can pretty much search any category or topic they are interested in like video games which could then be re-filtered again to get them to a specific type of game like role-playing or strategy. By the creation of this site and other social media applications like Facebook’s groups, people are now able to send and receive their thoughts and opinions to other consumers they trust more than the actual companies selling the product. This idea of consumer to consumer interaction is not a new concept but due to the internet being able to amplify the voice of one, many companies have found that their idea of branding through social media is going to be a lot harder.

Holt discusses five principles that he believes can help companies combat or win over the crowd culture, “1. Map the cultural orthodoxy, 2. Locate the cultural opportunity, 3. Target the crowd culture, 4. Diffuse the new ideology, 5. Innovate continually, using cultural flash-points” (Holt, p. 46-48). I believe that number five is the key for companies to take back the marketing and branding power from the crowd (consumer). By continuing to innovate and use cultural flash-points, also know as stereotypes or fads companies can keep the brand fresh and new for consumers. By continuing to create content or evolve their products companies can now start branding and marketing in a louder voice then the crowd.

Examples of companies that are branding and marketing their ideas through content are websites that showcase and demonstrate well-structured short documentaries like http://www.greatbigstory.com and http://www.shortoftheweek.com. Greatbigstory.com creates and publishes short documentaries, “A video network dedicated to the untold, overlooked, and flat-out amazing. Humans are capable of incredible things and we’re here to tell their stories” (Greatbigstory.com). This site uses social media applications like Facebook and YouTube to showcase short documentaries which range from one to two minutes in length. Within the two-minute duration of the short documentary they can encompass the ideas and history behind the subject successfully well. On the other hand, Shortoftheweek.com showcases short films and short documentaries from across the world, “We’ve been serving up epic, bite-sized films to millions around the world since 2007. We discover and promote the greatest and most innovative stories from around the world…” (Shortoftheweek.com). Both of which have been able to use social media platforms like Facebook, Instagram and Twitter to publish and showcase short documentaries that not only entertain but can teach viewers about the reality and history of our world. They are both able to use fresh content to brand themselves as well as keep the audience engaged and coming back for more.

The structure of the documentary is a combination of visuals through the use of a video and text which will be included underneath the video. The text goes into detail explaining the ideas behind the car and its rich history. The video or what I call the visual portion is used to pull the audience in to watch the video and then continue to stay on the page by reading about the car. Because I discuss Holt’s article about branding and the use of social media, I decided to create a new film production company called Grizzly Films. Along with the video I created a website for the project and social media accounts on Facebook, Instagram, and Twitter where I advertised the video.

In regards to marketing and getting the video or in this case the documentary out to a specific audience I used the social media applications as well as had it shared with companies that catered to the automotive industry. With the use of hashtags and collaborating with other groups and pages that post about car culture I was able to use them as a spring-board to not only tease content for the video and site but used them as an outlet to release the video online.

In regards to the production company and the website, I have already added two more videos to page for content and will continue to use the site as my production company for further projects.  In an article called, “me, Inc.” by Ann Friedman she discusses the ideas behind personal branding and building a brand identity regardless if you are going to work in the arts or in business. “In the best-case scenario, a brand keeps you focused in a world of unlimited options” (Friedman, p. 44). By continuing to use the site and make it a permanent place to add and promote content, the brand itself has the potential to expand. Friedman also believes that branding yourself is getting easier because of the vast amount of outlets on the internet but like Holt she understands that it is getting harder to stand out because everyone is doing the same thing.

How To Edit and Structure Your Documentary – VideoUniversity. (n.d.). Retrieved February 20, 2016, from http://www.videouniversity.com/articles/how-to-edit-and-structure-your-documentary/